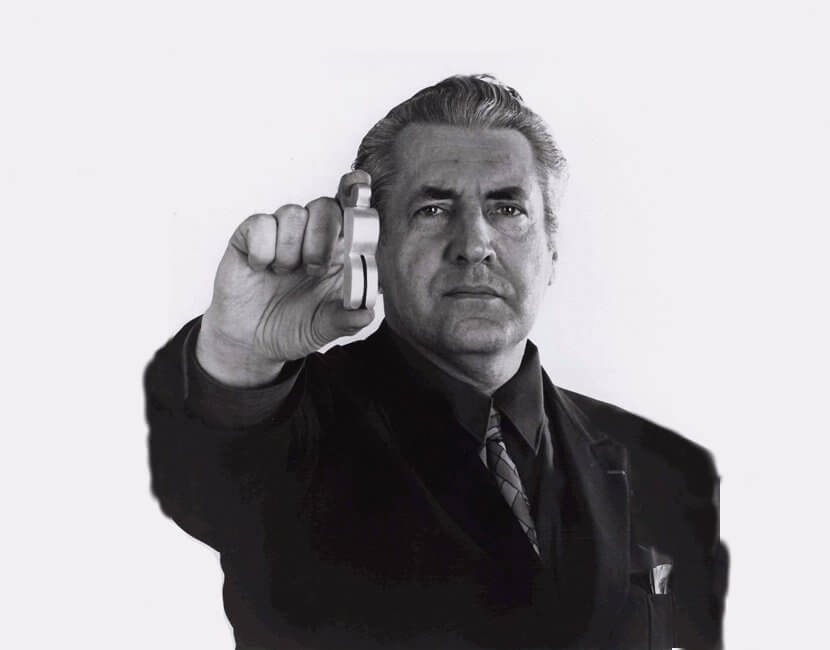 Paul Van Hoeydonck was born in 1925 in Antwerp. This co-founder of the group of artists G58-Hessenhuis had his breakthrough in the second half of the 1950s with geometric abstract and monochrome work. Euphoria and drama are the constant elements in his work, focusing on an age-old dream of mankind that happened to come true in 1961 : the exploration of space. Astronauts, planets and satellites are constant themes in his reliefs and objects, where white is used as a symbol of the unknown. For Van Hoeydonck space travel is no adventure, it is a matter of course, even a necessity. His work was widely and internationally acclaimed and presented in top galleries, in important art manifestations like the Venice Biennale, Documenta III in Kassel-Germany, the ZERO exhibitions and in numerous museums all over the world, from the Museum of Modern Art in New York to the Museum of Contemporary Art in Antwerp. Due to his activities in New York and his interest in space travel, NASA took notice of Van Hoeydonck and invited him to come to the Cape. He was introduced to the three Apollo 15 astronauts at the Cape. They agreed to take the sculpture along with them, providing that president Richard Nixon approved. And he did so. In 1971, for the first time in history, the crew of Apollo 15 put a sculpture on the moon, this natural satellite of our planet earth : « Fallen Astronaut » by Van Hoeydonck. It’s not only a tribute to the astronauts, but also a sign of hope for a better world. For his artistic career and his great interest in space Paul Van Hoeydonck received the high degree of doctor honoris causa of the University of Liège. Paul Van Hoeydonck lives and works in Wijnegem, in the province of Antwerp in Belgium. E. Van Buynder, Honorary-president Museum of Cont. Art Antwerp.